Signing up for the Future……

THE Grasmere Gingerbread Shop’s iconic sign has been renewed by one of the UK’s most controversial artists.

Michael J Browne – who infamously depicted football legend Eric Cantona as Christ in his painting The Art of the Game – has now added culinary legend Sarah Nelson to his portfolio of work.

“I went from old sepia photographs of Sarah Nelson to get her look exactly right,” said the Manchester painter.

“Her eyes are strong and determined, even as an old lady, and I really wanted her powerful aura to come across in the overall shop sign.”

Joanne Hunter, co-owner of The Grasmere Gingerbread Shop is thrilled with the new sign.

“I think Michael has really captured Sarah Nelson’s steadfast character. She defied terrible personal tragedies to reach the age of 88 before she died in 1904,” she said.

“Unlike most modern shop signs which are digitally produced, our new sign is hand-painted on wood and it is an authentic piece of art in its own right,” she said.

Michael has even signed it on the back.

It will replace the existing sign which was damaged in a recent storm, and is the 10th overall since the shop first opened in 1854. 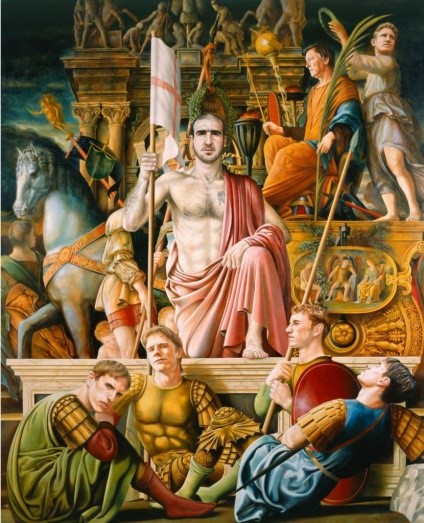 Michael used ordinary outdoor paint for the sign and finished it off with yacht varnish. It took him about a month to complete.

A contemporary artist who works in a Renaissance style, Michael recently painted a brilliant scaled-down version of Michelangelo’s Sistine Chapel on the ceiling of a Manchester restaurant.

He has also painted pictures of the famous Manchester United football squads in various Renaissance settings.

In need of a laugh and a distraction? Joanne Hunter, Director shares all secrets (except the recipe!) with @stroudemr on latest podcast of 'Clowning Around' talking all things #FamilyBusiness 👏Take a listen here 👉pod.link/1499174238 #BizHour #SmallBiz #Podcast #MondayMood pic.twitter.com/MLTm9ef9fc

Please respect the lockdown and the #LakeDistrict is closed. #COVID19 twitter.com/CumbriaRoadsPo…

We really do have some lovely customers! Some new ones, some that have been with us for many years and some that we call friends. #ThursdayThoughts😊 Made our day when we received a handmade card today. 😍🙌🏽 All our team will be out for the weekly #NHSclap. #clapforourkeyworkers pic.twitter.com/S6r4731FNH

Difficult to resist when you see the packaging. Open the tin and eat a piece of freshly baked #GrasmereGingerbread 📦 Our iconic branding does not go a miss. 👀😋 #ArtisanMade #Gingerbread #NorthWest #Foodies twitter.com/AndyRobertsSEO…