OOR ER MISSUS! The Grasmere Gingerbread® Shop has some of the cleverest, cheekiest customers in the country.

After Carry On stars Amanda Barrie and Sherrie Hewson visited the shop for a Carry On Camping spot on ITV’s This Morning programme we launched a caption competition to accompany this photograph.

“What on earth did the customer say to shock poor Sherrie?” we asked you.

After laughing our way through hundreds of entries we finally reckoned that Kat Kingsbury from Hull got it spot on.

We just know that Loose Women star Sherrie would LOVE being described as a tongue-in-cheek ‘tasty blonde tart’!

As fans of the former Coronation Street and Benidorm actor will know, her superb timing and camp facial expressions are comedy gold.

The two runners-up were Helen Meadows from Mansfield who suggested: “Curry and chips twice please and giant Cumberland sausage!” and Graham Dow of Glasgow who wrote: “Is that hair real? Or are you a true Gingerbread head?”.

Well done to Kat – who won a special Grasmere Gingerbread® hamper – and thanks to Sherrie and Amanda for a truly memorable day. 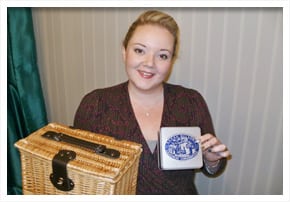