Prince Charles in Grasmere – A day to remember

GRASMERE enjoyed a right Royal treat when Prince Charles called in to give our community a morale boost.

After hearing how last December’s Storm Desmond seriously affected local people’s homes and livelihoods, the Prince arranged a special visit to one of his favourite parts of the country. 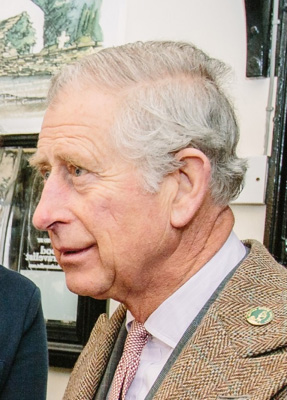 In a series of exclusive pictures and captions, we tell the story of our village’s special day. Photographs by Steve Barber. 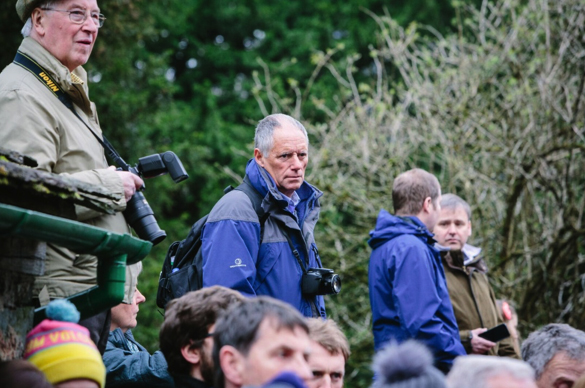 Photographers were out in force to capture every moment of the Prince’s visit. Crowds gathered early and lined the narrow streets of Grasmere, eager to grab the best possible view of the Royal guest. Some of those lining the streets were local schoolchildren. Whilst a grey sky and persistent drizzle threatened to turn into a downpour, the sun eventually broke through. 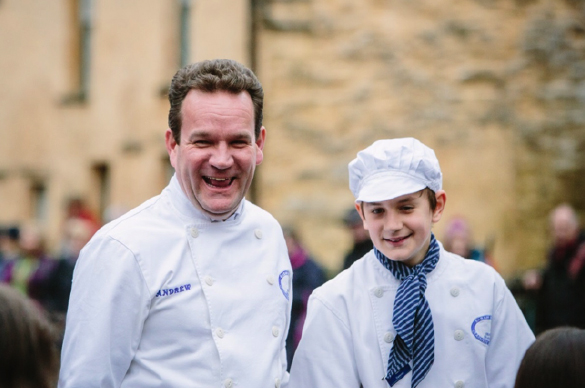 While waiting for the Royal arrival, Grasmere Gingerbread co-owner Andrew Hunter and his son Eamont chatted to customers and well-wishers outside the Grasmere Gingerbread Shop. Whilst Andrew is used to VIPS and celebrities coming into the shop, the visit by Prince Charles was an incredible moment for his family business. “Prince Charles is very supportive of Cumbria and the Lake District economy and we were very honoured that he chose to visit us,” he said. 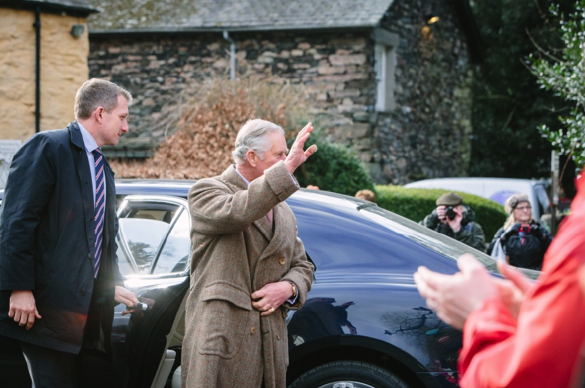 Upon his arrival, Prince Charles acknowledged the crowd with a wave, accompanied by the clattering sound of cameras snapping every moment. 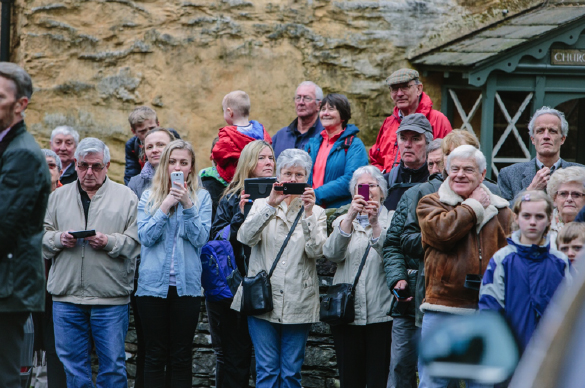 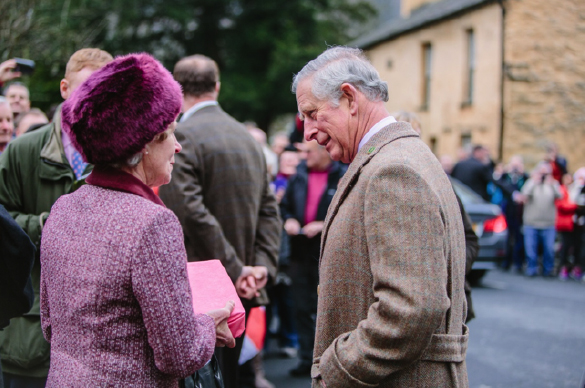 Prince Charles was accompanied on his visit to Grasmere by Claire Hensman, the Lord Lieutenant of Cumbria and the Queen’s representative in the county. She explained the hardships endured by many local people in Cumbria following the devastating flooding of December 2015.

Co-owners Joanne and Andrew Hunter were introduced to Prince Charles before he greeted members of their team. 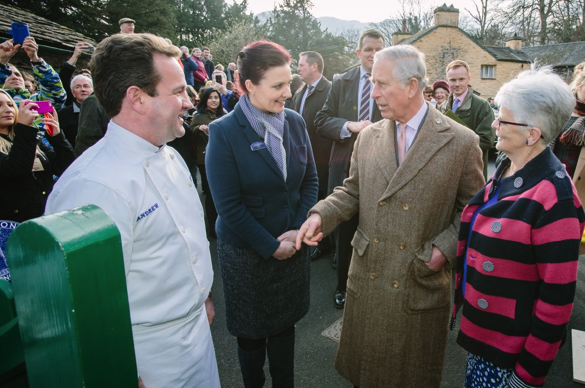 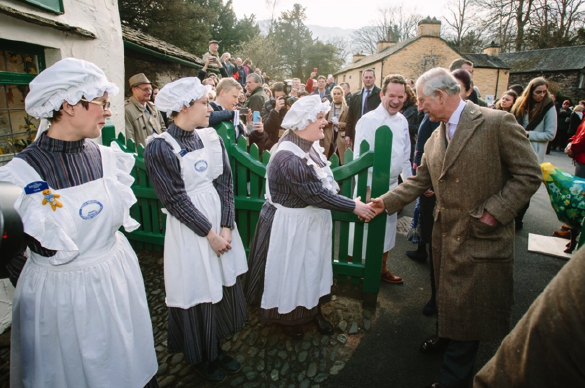 Shop assistant Fay Dawkins and some of her colleagues lined up to greet the Prince. “I was so nervous I cannot remember what he said, or what I replied,” said Fay. “All I remember is that he was extremely charming and friendly!” 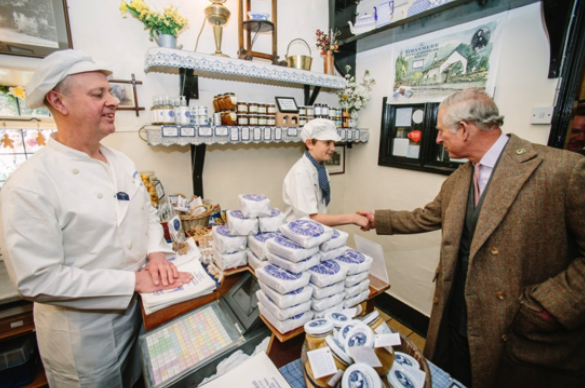 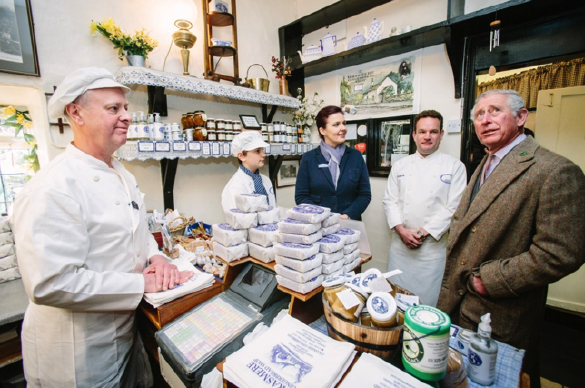 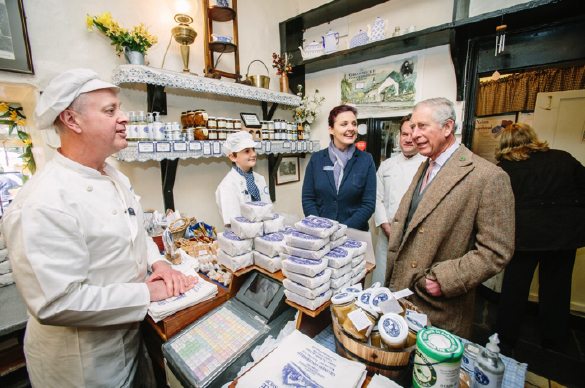 The Prince put everyone at their ease, chatting to Nigel about his daily duties and some of the funnier moments working here down the years. “He was really interested in the history of the shop and I was really comfortable talking with him,” said Nigel. 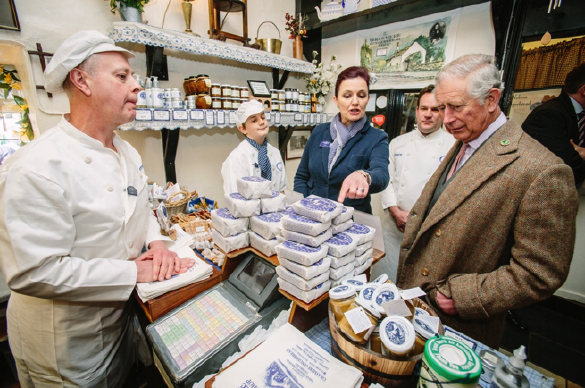 Joanne explained how, as a litle girl, she practised wrapping Grasmere Gingerbread in its distinctive parchment. “I would go faster and faster and now I can do it with my eyes shut,” she told Prince Charles. 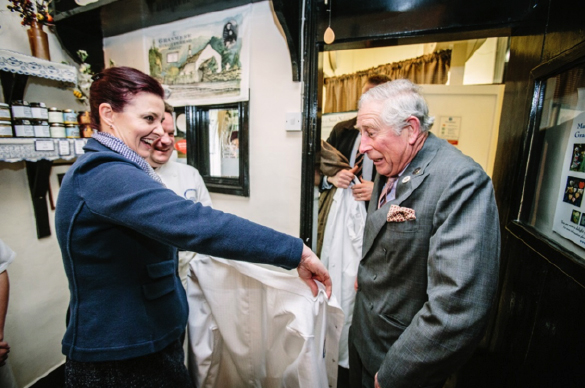 One of the lighter moments of the day came when Joanne showed Prince Charles his specially liveried white coat, essential to put on before entering the bakery. “He looked a bit horrified at first but he soon got into the spirit of it,” said Joanne. “I was looking at this photograph and I can’t remember what we were laughing about now but it was all very natural and even one of his security men was enjoying the banter,” said Joanne.

Joanne and Andrew showed Prince Charles how a tray of freshly-baked Grasmere Gingerbread is divided into its traditional oblong-shaped pieces. The Prince insisted on having a go himself. 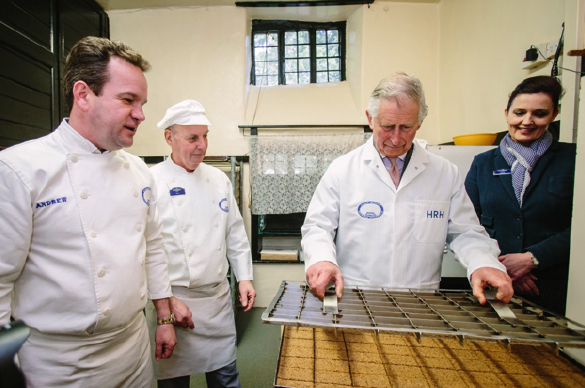 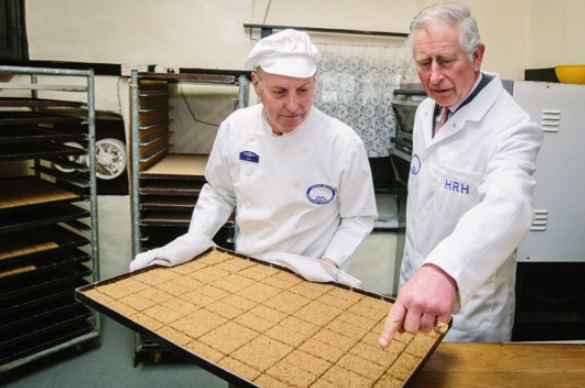 Assisted by baker Steve Mellor, Prince Charles appreciated how no Grasmere Gingerbread is lost in the dividing process; such is the design of the large tray cutter. 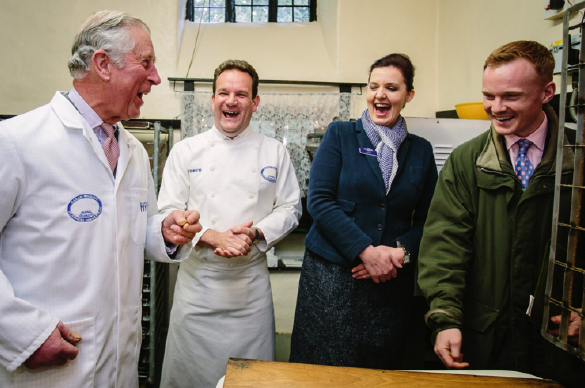 Again, Joanne cannot recall what was said to provoke the uproar. “But it was so nice that Prince Charles was so chatty, relaxed and genuinely interested in everything that we told him about the history of the shop,” she said. “We all had respect for him, of course, but it wasn’t like we were standing on eggshells. We all felt we could just be ourselves.” 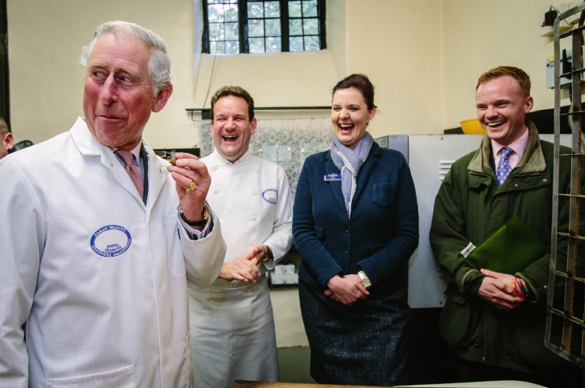 And so to the end product – freshly-baked Grasmere Gingerbread! Prince Charles couldn’t wait to try a piece of our traditional Cumbrian delicacy. After leaving the Grasmere Gingerbread Shop, Prince Charles stopped by to see the grave of William Wordsworth in the adjoining St Oswald’s Churchyard. He is seen here enjoying a joke. 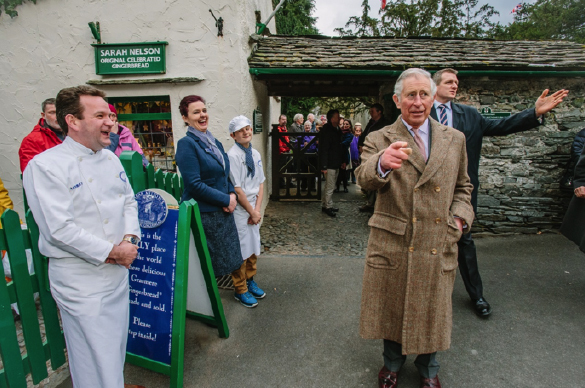 Prince Charles continued to joke with Andrew and Joanne as he prepared to leave Grasmere. 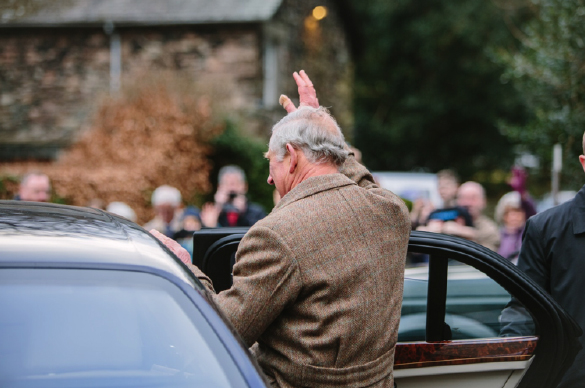 A final wave from the Prince and he was gone. “It was such a memorable day, a lovely boost for everyone who has battled so hard since the flooding that did so much damage to our beautiful county,” said Joanne.

A staple to most visitors trips to #Cumbria and the #LakeDistrict 🏔👌🏽 Thank you for visiting us. ☺️💙 twitter.com/suzistockpot/s…

Freshly baked little #GrasmereGingerbread hearts at the @nationalwedding Show Olympia. Telling the story of gingerbread favours in the medieval times from beautiful #Grasmere in the #LakeDistrict #NWS2020 #WeddingIdeas #SmallBizSat pic.twitter.com/gjZQZZ7Cj8