Tying the knot on TV

The first couple in the UK to get married in a beach hut tied the knot with complimentary Grasmere Gingerbread® Wedding Favours.

Frazer Seed and fiancée Kate Smith said ‘I do’ and ‘I will’ to each other on Bournemouth Beach, live on ITV’s Daybreak show.

“It was fantastic,” said Kate afterwards. “I was nervous but so happy.”

The couple won the programme’s ‘Here Comes the Tide’ competition after the voting public heard of Kate’s amazing recovery from a head-on car crash last September. 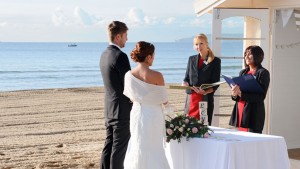 Whilst in hospital after suffering horrific injuries including a collapsed lung, broken ribs and shattered right leg which put her in intensive care, Frazer popped the question.

“We were due to get engaged later in the year anyway so I thought it might help to raise her spirits,” said Frazer, 31, a project manager at British Aerospace in Lancashire.

The emotional ceremony was witnessed by millions of Daybreak viewers.

After the ceremony the couple and guests enjoyed complimentary Grasmere Gingerbread® Wedding Favours during their reception at the nearby Highcliff Marriot Hotel.

Joanne Hunter, partner in the Grasmere Gingerbread® Shop, added her congratulations to the fairytale couple.

“It’s a really heart-warming story and they are two of the loveliest people you could wish to meet,” she said.

“I hope they and all their guests enjoyed our Wedding Favours.”

It was during a visit to a wedding fair at Manchester’s Monastery in February that the couple stopped at the Grasmere Gingerbread® stand.

“We’d been to the shop in Grasmere before and loved the gingerbread,” said Frazer.

“So we had a nibble of the favours and decided on them instantly.

“And as I’ve got ginger hair it fitted perfectly!”

The couple opted for heart-shaped presentation boxes dressed with personalised red ribbon and a little wooden gingerbread bride and groom on top.

“They were absolutely lovely and we have saved the boxes as keepsakes,” added Kate.

Daybreak stunned the happy couple on live TV by announcing a surprise honeymoon gift – a luxury summer cruise around the Mediterranean with stop-offs in Monte Carlo, Rome, Pisa and Barcelona.

For a week prior to the wedding the couple were filmed by Daybreak preparing for the happy day.

Kate was thrilled when Royal hairdresser Richard Ward – who was Pippa Middleton’s stylist at the wedding of Prince William and Kate Middleton – was chosen to style her hair.

“It was absolutely hectic but so much fun,” said Frazer, whose pet dog Teddy – a Pomeranian pup – was at the couple’s side during the ceremony.

Kate’s father travelled from Thailand to give her away.

“He hadn’t seen her since before the crash so it was an emotional reunion,” said Frazer.

A staple to most visitors trips to #Cumbria and the #LakeDistrict 🏔👌🏽 Thank you for visiting us. ☺️💙 twitter.com/suzistockpot/s…

Freshly baked little #GrasmereGingerbread hearts at the @nationalwedding Show Olympia. Telling the story of gingerbread favours in the medieval times from beautiful #Grasmere in the #LakeDistrict #NWS2020 #WeddingIdeas #SmallBizSat pic.twitter.com/gjZQZZ7Cj8